On December 13, 2013 Karl Pierson entered Arapahoe High School armed with a shotgun, intending to kill students and faculty at the school. Fortunately, he was stopped before completing his mission as planned, but not before ta­king the life of 17-year-old Claire Davis. Claire was not on the gunman’s list, but was simply in the wrong place at the wrong time. Her last action was to ask the student, whom she had known for several years, what he was doing. Confronting the shooter cost Claire her life but possibly saved the lives of many of her classmates and teachers.

Only five months after Claire’s tragic passing, family, friends, community members, Arapahoe High School (AHS) and Littleton Adventist Hospital (LAH) began planning a memorial to her on the AHS campus. Dubbed Clarity Commons, the memorial is a one-acre park on the campus featuring benches, grass berms, mature trees and shrubbery. At the center of the park is a granite pillar, dedicated to the memory of Claire Davis and filled with inspirational messages and quotes. The center plaza will continue to be filled with personalized pavers engraved with loving thoughts from donors. The park provides a quiet area on a busy campus where students and community members can gather for outdoor classes, reflection and meditation.

On August 16th, 2014 – on what would have been Claire’s 18th birthday – Clarity Commons was dedicated in her memory. In attendance were her parents, classmates, friends, neighbors, and volunteers who made the park possible. Among the tears and smiles, it was extremely evident that Clarity Commons is a fitting tribute to the memory of a young woman who believed in consciously choosing to love. 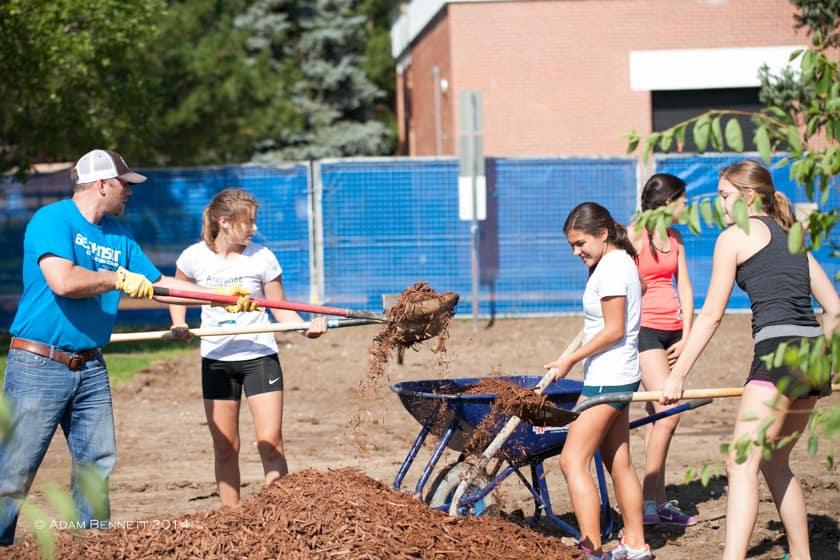 When the Clarity Commons team decided to accept GE Johnson’s offer of services to complete the project, there was an outpouring of support throughout the company’s ranks. There was a general sense of excitement to be a part of something so meaningful.  In addition to generating visibility for the project on social media, 26 GE Johnson staff and family members joined the volunteer effort leading up to the opening. These team members were a part of the roughly 150 volunteers comprised of Littleton Public Schools staff, LAH staff, Arapahoe HS students, friends, family members, and community members who turned out on the volunteer day to share in the completion of Clarity Commons.

Clarity Commons has a project value of $650,000; $323,000 was raised through generous donations from Littleton Adventist Hospital, the Littleton Adventist Hospital Foundation and local subcontractors. GE Johnson donated the insurance and rental equipment, as well as all project management and site supervision totaling more than $70,000. The balance was raised through the sale of pavers, benches and trees on the site.

As the plans and construction of Clarity Commons progressed, it became apparent the project was far more than just a park with new landscape and fancy walls, but an opportunity for a contribution to the greater good – it was a path to healing. Every worker involved in the project poured their heart and soul into it, and the results truly reflect how much Clarity Commons meant to the team. The volunteer effort leading up to the opening of the park was testament to this as well, with more than 150 people showing up to help plant shrubs and trees. Working towards a common goal, the Davis family, AHS students and members of the Centennial community found a way to keep Claire’s spirit alive in the act of creating something special.

Back to Community Focus