Colorado Springs, Colo. – June 4, 2018 – Construction on the new Pikes Peak Summit Complex officially began Monday, June 4, during a groundbreaking event that included a symbolic, controlled blast on the summit of Pikes Peak – America’s Mountain. The complex is anticipated to be complete by the fall of 2020, weather dependent.

The new 38,000-square-foot complex will include a newly designed and constructed Summit Visitor Center including a mechanical space and the Colorado Springs Utilities communications facility. The U.S. Army is also constructing a new High-Altitude Research Laboratory, which they will fund. The existing Summit House, constructed in 1963, will remain fully operational to visitors throughout the construction process.

“As a lifelong resident of Colorado Springs, and now as its proud mayor, I can’t express enough how excited I am about this project,” said Mayor John Suthers. “I am particularly proud of the collaboration between the major stakeholders that has guided us to today’s groundbreaking, and I am confident the new Pikes Peak Summit Complex will provide a worthy crown for the popular destination, inspiring visitors from all corners of the world and of all ages and abilities for generations to come.”

The project is a collaboration between the U.S. Forest Service, National Park Service, State Historic Preservation Office, tribal representatives and the summit’s five major permit holders: the City of Colorado Springs, Pikes Peak – America’s Mountain, The Broadmoor’s Pikes Peak Cog Railway, the U.S. Army High-Altitude Research Laboratory and Colorado Springs Utilities. The initial stakeholder kick-off meeting was held in April 2013, and the final step before breaking ground – completing an environmental assessment issued by the U.S. Forest Service – was finished on May 3 when the project received a “Finding of No Significant Impact.”

The new Summit Visitor Center, which will be constructed by local contractor GE Johnson, will offer sweeping views and feature digitally interactive displays focused on the history, significance and geology of Pikes Peak. Interpretive outdoor exhibits will also be built along the accessible, elevated pathway, which was designed to help protect the summit’s fragile tundra. Other upgrades include an improved kitchen, dining facilities, retail space and expanded restroom facilities.

The project will cost an estimated $50 million and will be funded in part by reserves from Pikes Peak – America’s Mountain, an enterprise of the city that generates revenue through toll fees and concession sales; revenue bonds taken by Pikes Peak; and public and private donations. More information on the capital campaign, supported by the Benefactor Group, can be found on givetopikespeak.com.

As previously announced, because of an anticipated record-setting number of visitors combined with limited parking capacity in the summit lot due to construction of the new complex, Pikes Peak – America’s Mountain is implementing a temporary, complimentary shuttle service through Sept. 15 to transport visitors to the summit. A record 600,000-plus people visited the summit in 2017, the summer months being the most popular. Visitors are encouraged to “know before you go,” and detailed information on the shuttle service and construction process can be found on pikespeakcolorado.com.

The official hashtag for the new Pikes Peak Summit Complex is #PikesPeakSummit. 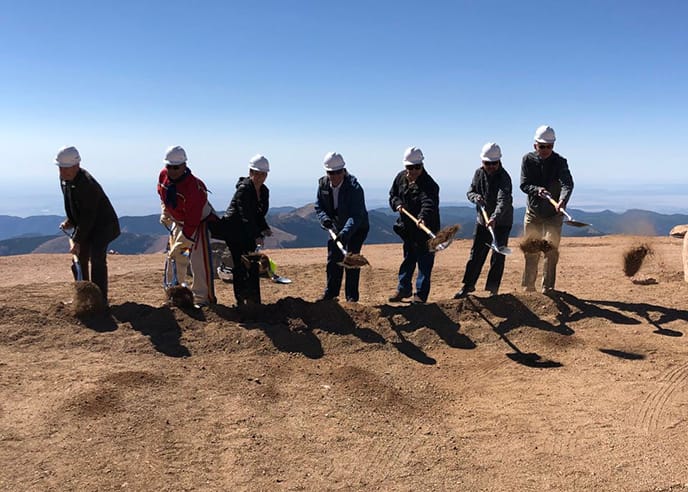