COLORADO SPRINGS, Colo. (KKTV) – You’ve probably noticed the skyline of Colorado Springs changing as the new Olympic and Paralympic Museum takes shape. It’s set to open in May. 11 News got a tour of the museum for a sneak peek of what will be inside.

It’s a massive and unique building set next to America The Beautiful Park. The city is making changes to that area as well, hoping it becomes a tourist destination.

“The building itself is just short of 65,000 square feet, and about 25,000 square feet of that is exhibit space,” said Brian Tominov, Project Manager, at GE Johnson Construction.

The building has even been recognized worldwide as one of the most anticipated buildings of 2020 because of its design.

“One of the more challenging parts of that geometry has been the diamond metal panels we see on the building. There’s 9,987 of those and not a single one of them is the same shape.” Tominov said.

When you first walk in, you’ll see a 40 foot LED wall playing video. Then you take an elevator to the top where you’ll start your journey through the US Olympic and Paralympic movements.

There are rooms and galleries dedicated to the Summer Games, Winter Games, the evolution of sports technology, and more.

Communications Director, Tommy Schield, says museum creators worked with Olympic and Paralympic athletes, to tell their stories. You not only hear their stories, but get to experience them yourself.

“When we talked to [athletes], one of the most memorable moments of the games is always walking in opening ceremonies under our nation’s flag and that’s an experience we wanted to recreate,” Schield said. “Guests will get that feeling to know what it’s like to walk into opening ceremony hearing chants of ‘USA'”

Visitors will even get to race against some of the world’s fastest athletes in a 30 meter sprint.

“You can choose who you’re going to race against, so Tatyana McFadden or Jesse Owens for example. You’ll probably lose but it’s still pretty cool,” Schield said.

There are six interactive activities in the building like this. That includes an archery exhibit that tests precision and accuracy.

At the end, you’ll watch a video in a 145 theater that’s been engineered to be completely soundproof for the best experience.

A walk through the museum will be more than just a tour, but an experience that evokes a range of emotions, as you get to experience some of what Olympic athletes experience, too.

In February, workers are expected to place the last panel on the outside of the building. The Olympic and Paralympic Museum is planning for a grand opening on May 31st that will be open to the public. 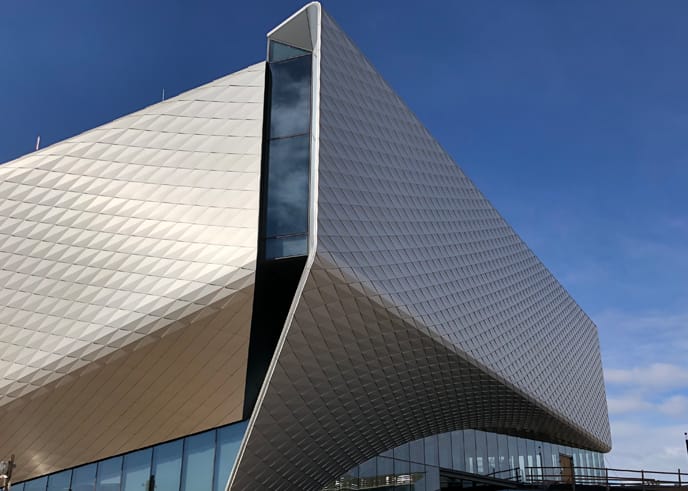