On Tuesday, December 1, Vail Health Hospital’s new east wing opened to the public. GE Johnson broke ground on this $141 million project in 2018 to bring a modernized healthcare experience to the residents and visitors of the Vail Valley.

Designed by Davis Partnership Architects, the expansion includes a new lobby, plaza, emergency department, and five levels of underground parking on the north side of the building, allowing ambulance and visitor traffic to be redirected away from a major pedestrian and tourist road in the center of Vail. The ambulance bay has snowmelt concrete and is covered to safely welcome patients and emergency responders.

The new on-site roof-top helipad, with direct elevator access to the emergency department, reduces patient transport times by 30 to 45 minutes. Previously, patients were transported by ambulance to the former helipad near Vail’s town hall. GE Johnson’s project team and AirSafe Consultants worked with the Vail Health staff in developing and testing operational and logistical plans for communication, pad lighting, and transportation of patients to and from the pad and their in-patient units.

The east wing expansion project included the demolition of the original circa-1967 clinic and the removal of a parking structure that GE Johnson constructed into a hillside just south of the Interstate 70 frontage road in 1990.

Phase I of Vail Health Hospital project (west wing) consisted of an intense horizontal and vertical expansion and renovation to five levels of the facility, completed in 2017 by GE Johnson. Over the course of 23-months, GE Johnson oversaw renovations to five levels of the building, and the addition of a conference center, patient drop off area, porte-cochere, and patient and staff support areas.

For more than half a century, GE Johnson Construction Company has been dedicated to enriching our communities by leading and building projects with the best people and ideas. The company embraces the power of ingenuity and trusting relationships, and values integrity, safety, collaboration, and excellence. GE Johnson is headquartered in Colorado Springs, Colorado with offices in: Denver and Vail, Colorado; Jackson, Wyoming; Oklahoma City, Oklahoma; and Lenexa, Kansas. 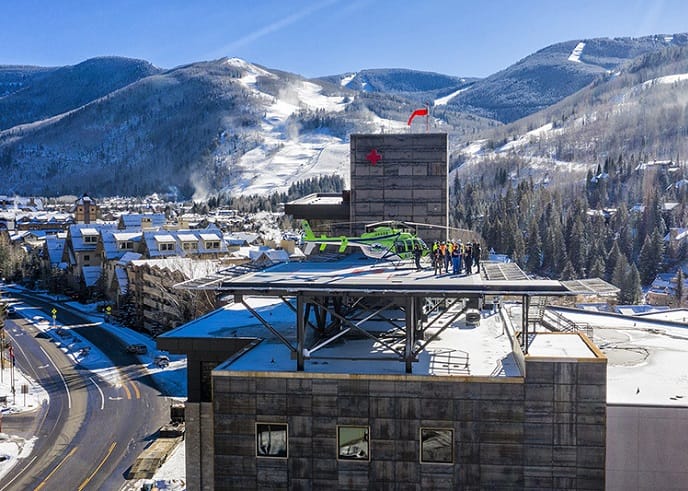